We all know the power of a good sequence of āsana; a sense of clarity, calm, ease in the body and mind, a sense of being prepared for what comes next in life. We begin each journey with the knowledge of where we want to go in an āsana class. When it comes to creating a sequence we may ask ourselves: Is there a peak pose, mood or further practice we preparing for or is this sequence the goal. The answer to these questions will determine when we strengthen or mobilise, pick up the pace or let it settle. This sequencing workshop is for teachers or dedicated students who wish to learn more about the art of sequencing āsana for themselves and others.

With backward bending as our theme will focus on:
– 3 regions in the body that need attention and care when backbending
– 3 categories of backward bending
– Key muscles within each region including direction of muscle fibres, connections to other muscles/ligaments or tendons.
– By the end of the workshop you have key ideas and concepts to create fun and informed sequences for backward bending. 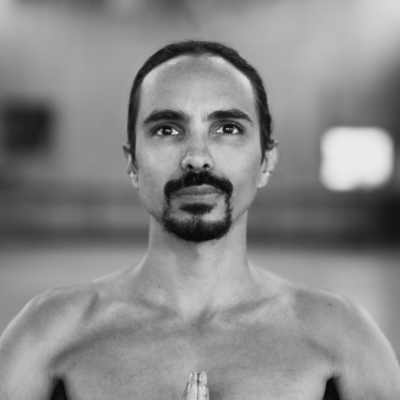 Advanced Certified Jivamukti Yoga Teacher | Jules Febre was born and raised in a section of New York City known as the Lower East Side. At the age of 13, Jules spent three months in India; two of which were spent in Mysore studying Ashtanga Yoga with Sri. K. Pattabhi Jois. During that time he was invited to share satsang with Swami Nirmalananda and Shyam Das, two radical yogis that have each contributed greatly to the progression of yoga in the West. At the age of 16 Jules began working at the Jivamukti Yoga School helping to clean, and is now considered one of the leading teachers of the Jivamukti Yoga method, teaching the method world wide as well as facilitating at the very highly regarded teacher training programs.Jules travels and teaches for a major part of each year, including Europe, Australia, Asia, and more. His classes offer a wide range and depth of understanding of Yoga Asana as well as Meditation, Chanting, and Yoga Philosophy. Teaching yoga is Jules’ passion. He is grateful to his teachers, Sharonji (Gannon), Davidji (Life) who he has had the privilege of studying with for over 15 years, for igniting his devotion to the Jivamukti Yoga practice and for inspiring countless students around the world. “Much of our time is spent in a virtual world of computers, phones and many other automated transactions. We are always choosing how to spend our time, which shapes our lives. The power of coming together, of sharing ideas, insights and practicing asana lends one to become more receptive. As we undertake this journey, we may do so together and thus together we come to realize the vastness of our existence.”—Jules Febre

Get our Monthly peace Newsletter